Sacerdos: The Sacerdos Mysteries I

…this new place was magnificent: shining whites and greys, golds and glossy blacks combined to form an ancient yet futuristic metropolis..

Caelara Teneo’s mundane life in East London with her father Celassis is shattered when a terrifying assault causes her to manifest supernatural abilities. As their past catches up with the Teneos, they are forced to flee through a secret portal to Sacerdos, the jewel of a world called Terra Magna.

Once there, Caelara discovers she is a giftblood, one of a select minority who have ruled the Universe from Sacerdos for thousands of years. Yet, as Caelara struggles to deal with the upheaval of growing up, factions within giftblood society break down. Beyond the walls of her educator, a war is brewing and Caelara’s place in it has been millennia in the making.

Sacerdos is the first stunning book in ‘The Sacerdos Mysteries’ series. In her very first book of fiction, author, Elizabeth Amisu draws us into the magical world of Terra Magna, with its ancient-futuristic citis and colourful people and oceans. Connected by a series of portals, the people of Terra are divided into the ungifted and gifted. The giftblood minority have been in power for centuries. Amisu started writing this novel when she was just 14. She was in daydreaming in her Latin lesson and saw fragments from Sacerdos play out in her mind, just like a film. 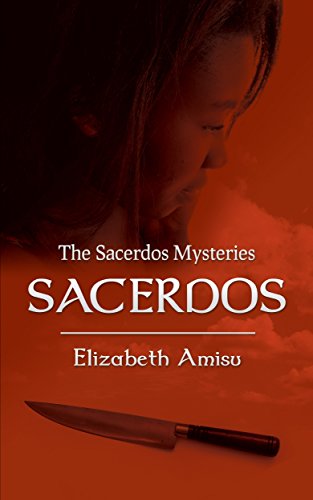