‘The Advorsa were not running the world. They were draining it dry. And if they had their way, there wouldn’t even be a world.’

Caelara Teneo is so powerful she can command the sky and sea but in ‘DISequilibrium’, her battle is with heartache. Terra Magna has fallen under Lasias’ spell. The people of her world turn against the gifted and hunt them for their magical blood. Their long reign has reached its end. Caelara’s quest for answers leads her away from the Arcane rebellion to far colder climes. Yet, she is not alone, the two loves of her life remain by her side and at war with one another.

‘DISequilibrium’ is the fourth book in ‘The Sacerdos Mysteries’, after ‘Sacerdos’, ‘Arcane Rising’, and ‘Waterblood’. For the fourth instalment, author Elizabeth Amisu wanted to create a psychological thriller, focusing on the after-effects of war and separation for the characters. She drew heavily on her own experiences of estrangement and trauma for this book, which follows Caelara, Nathan and Xaviour. ‘DISequilibrium’ takes us on an emotional and physical journey throughout Terra Magna. Amisu spent four years planning the book and eight months in revision to give her readers more clues than ever. We come closer to discovering the reason for Caelara’s mark, the truth behind her embedded jewel and the Keys to Time. One step closer to Lasias’ disequilibrium. 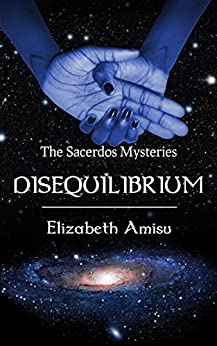